Let us examine some interesting facts on healthcare spending.

Healthcare spending to double in India by 2012

For an emerging economy, India spends a small $14.8 billion on healthcare which equates to roughly 5.2% of the GDP. This will however change quickly and the country is expected to spend $33.6 billion by 2012 with healthcare spending accounting for 8.5% of the economy.

Here is a graph comparing spending for some countries as a % of their GDP of their stack up currently (Source: WHO Health Statistics,2007). 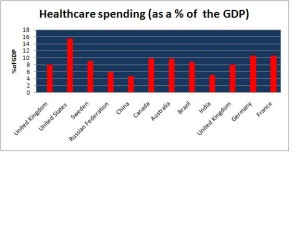