There are many areas in a hospital that need dashboards to be able to identify and resolve problems. Let us look at an example. In many ways, a bed management or bed control function in the hospital is like an Air Traffic Control. They they control the take off (discharges) and landings (admissions). In hospital terms they control the patient flow from several areas such as emergency and surgery to Inpatient units. But, there is one major difference between an air traffic controller and a hospital bed manager. While the former has ‘real time’ information and visual indicators to make decisions, the latter relies on numerous phone calls,faxes and experience to make their bed decisions. Naturally, the decisions are delayed or sub optimized (like when patients are shifted to a higher level of care even when there is not need for it). The result is bottlenecks and delays throughout the system. Which in turn increases ‘patient days’ and negatively impacts clinical and financial outcomes.

Hospitals in the US, tend to collect terrabytes of data annually. But the data is not useful in and of itself. Because, it remains inactionable unless its visually processed and represented in the form of a meaningful dasboard with bells and whistles built in. Reverting back to our example, if we do not have a handle on our daily/hourly admissions, length of stay and patient care hours and other key performance indicators, it is virtually impossible to reduce delays and length of stay for patients.

So what should a hospital dashboard look like. We did some research and found a great example. One of the best designs we found from our research was iDashboards . So check it out below !!! 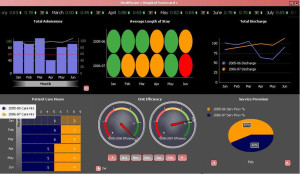 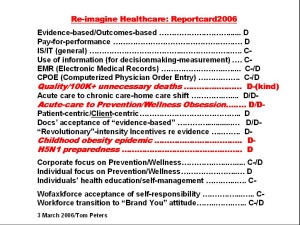 What we cannot measure, we cannot manage. That is a proven adage, so have you ever wondered what healthcare report card will look like ? Or for that matter, if it is even possible to create such a report card and yet keep it simple?

In Healthcare we usually collect a lot of data related to different aspects of the business. Everything from clinical quality to outcomes and patient satisfaction is measured. On average any hospital in the US tracks over 100 indicators every year to gain insight into their practice, patient preferences and overall business. So creating a common report card that would work for even a handful of hospitals can become a tedious task.

Managment guru Tom Peters has created a healthcare report card to measure the state of US healthcare. He grades the overall system on 19 metrics or parameters. The beauty of this report card lies in it’s simplicity. The metrics have been chosen very carefully and the grading system is straight out of an elementary school test. The idea is to create a performance picture that is easy to understand and interpret.

5s is a methodology developed in the toyota production system from which lean thinking derived. The 5s system is perhaps the most easily applicable and adaptable tool of lean in healthcare setting. It’s also a tool that can deliver real results impacting both quality of care and the bottomline quite dramatically. If you are not convinced yet, let us consider this…

If we had applied 5s to all of america’s Inpatient units in 2005, and reduced just 5 minutes from a patient’s length of stay. that would amount to approximately 135,985 days of care reduced. I am not going to venture a guess on the amount of lives saved . But it would be easier to do the math on the financials and if you are so inclined you will see a obscene amount of dollar savings.

When done well, it can deliver even better results. Let us examine the methodology and then we will look at the ‘done well’ part.

The 5s method has 5 steps to implement
Sort (Seiri): This refers to the sorting through all the charts, supplies, equipment and meds etc., in the work area and keeping only essential items. Everything else is stored or discarded. This leads to fewer hazards and less clutter to interfere with productive work.
Straighten (Seiton): Focuses on the need for an orderly workstation. Charts,Forms and other equipment must be systematically arranged for the easiest and most efficient access. There must be a place for everything, and everything must be in its place.
Shine (Seiso): Indicates the need to keep the workplace clean as well as neat. This is a daily activity. At the end of each shift, the work area should be cleaned up and everything is restored to its place.
Standardize (Seiketsu): Allows for control and consistency. Basic housekeeping standards apply everywhere in the facility. Everyone knows exactly what his or her responsibilities are. House keeping duties are part of regular work routines.
Sustain (Shitsuke): Refers to maintaining standards and keeping the area safe and efficient order day after day, year after year

Start looking at your most busy areas and just take pictures, you will be amazed at the amount of clutter you find around you. Specifically take a look at your Nurse’s station, Physician work areas, Operating rooms, Triage, Registration and Patient bedsides. Start a 5s program today and reap it’s rich benefits.

In an earlier post we examined how health care organizations are increasingly investing in clinical information systems( aka EMR) and, the benefits from such a system. As these systems have evolved, vendors(like with other application software) are increasingly migrating to a web based or online EMR systems. For as little as $500/month some vendors offer a full featured EMR system for physician offices, providing advanced features such as charting, drug interactions, etc.

While some physician offices and provider groups have bought into this (partly because they require considerably lower investment than desktop based EMR software), there is still a lot of skepticism. Just as with any other new technology questions are being directed at the security of data on such systems. This is amplified due to sensitive patient data and, payment information residing in such systems.

Houston Neal at SoftwareAdvice, recently told us about his article on the double standards that exist in healthcare when it comes to evaluating the security of web based Electronic Medical Records (EMR) systems. He notes that vendors of such web based EMR software put in considerable resources and efforts to secure data exchange, data storage and, data integrity.

How Vendors secure medical data in web based EMR

To protect data transmitted between a physician office and the server, vendors use HIPAA-compliant data encryption technologies, the standard being 128-bit secure socket layer (SSL) encryption. The servers are powered with firewalls to block illegitimate traffic, and intrusion detection systems to monitor when someone tries to hack the system. In addition, vendors safeguard the data center where the server exists, storing the server in a highly secure compartment with un-interruptible power, air filtration and advanced fire suppression systems. At the physician’s office, software will have permission settings for each user, allowing them to access the EMR only during specified hours and days of the week.

While there are definitely some valid unanswered questions about security and HIPAA compliance of such systems, it does look like many of the questions are being answered by the top quality software vendors.

Now, we wonder how many exisiting health care providers or even large acute care hospitals currently have such sophisticated secure data centers ? We will leave that question as food for thought. 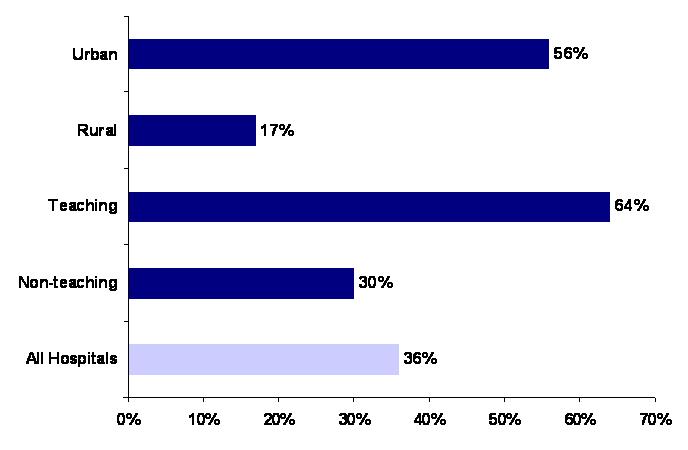 With over 65% of America’s Emergency Departments reporting capacity issues, diverting ambulances has become common place. “To divert or not to divert?” is the questions often facing managers and administrators. Let us examine some quick facts.

According to the AHA in 2007, over 56% of Urban hospitals reported diversions in 2007 (above)
Lack of staffed Critical care beds was cited as the number one reason for ambulance diversion
On average, approx. 15.5% patients arrive via ambulance

With about 34 ambulances being sent to EDs around the US every minute, most administrators, even state and county officials have settled into status quo in most places. But there are some well documented and concerted efforts being made by a few EDs. Which brings us to the question, Is it really possible to have Zero diversions. The answer is a resounding Yes!!!. And this has been proven by Seattle’s best (no not the coffee company) . A policy has been passed in King County, WA to enforece zero diversions in Seattle area Emergency departments. The policy requires critically ill patients to be taken to the ‘hospital of their choice’ or the nearest hospital.